Say hello to the new and improved Tourism and Obsessive Challenge tables, and the addition of the Freyne Club badge.

The Tourist challenge and Cowell Club have now joined forces and are available under the single umbrella of the “Tourism” challenge. You still get awarded the same badges as before, but now they appear as milestones on your tourism journey, rather than as distinct challenge tables with their own separate lists of events. This has several benefits that help people out:

A picture describes it best, so here’s a screenshot from a parkrunner who has got their ‘Cow’ (Half Cowell), but hasn’t yet reached the lofty heights of the Cowell Club.

As you can see in the picture, the point at which a badge is awarded is denoted by including a small version of the badge at the start of that row.

The eagle-eyed among you may have noticed that there is another badge available beyond the Cowell Club at 100 events. This is for joining the Freyne club for which you need to have visited 250 different events! Like the Cowell Club, this was named by the parkrun tourist community by the first person to reach the milestone, Paul FREYNE.

Here is a larger version of the new badge. We’ve taken to calling it the Freyne Train :) 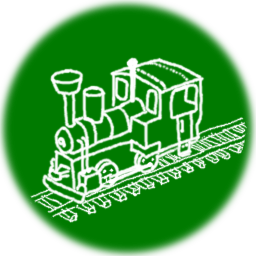 Only 250 different events? Hasn’t someone already got to 500?

As of right now, the only person to achieve 500 different events appears to be … Paul FREYNE, he of the aforementioned 250 club fame. This is a feat that only a handful of people are ever likely to achieve, and to make a badge for it now seems excessive. If you’ve got the time, disposable income, and determination to get to that milestone, the personal satisfaction of reaching that mark will have to be enough for now.

The Obsessive badges were among the first challenges to be added to the extension, as counting up the number of events run per year is pretty straightforward. :) There are, however, two things that were not quite right about this challenge:

The Obsessive challenge is now a single table and you can get at most one badge awarded per year. Additionally, you can now also see the badges that you haven’t got yet (in a similar way to the tourism challenge) so that you can see what you are working towards.

What’s the closest parkrun to your average parkrun location?

Yes, we know that calculating your average parkrun location is a fairly useless stat but now we’ve extended it to work out which parkrun event is the closest to that location. So you can go run it, if you want. Just click the parkrun’s name to find out more about it.

We have been releasing this extension as version 0.something for nearly two years. We decided that it’s clearly working well enough to be worthly of a version 1 release! We’ll try and be a bit more logical with our numbering system in the future, and increase the second number whenever we add a new badge, stat, or challenge, or something significant changes in the way things are displayed on the webpage.

If you have already installed the extension it should update soon. Typically we have found it takes a few days for Chrome and Firefox to auto-update, but it should do so eventually. If you haven’t yet joined the fun you can get it from one of the links below. :